I have been in Alexandra, Central Otago NZ for the last week and a half. Alexandra is where I grew up and where my parents still live. We had been planning a big outdoor music event as a fundraiser for Food for Thought, but due to a number of acts pulling out at the last minute we had to cancel. Instead, we invited friends and family up to my parent’s house for a laid back social afternoon/evening. Thanks mum and dad for offering up the house without hesitation!

We had invited a few musicians so that we could hopefully have some entertainment. Sav, (Blair Savory) a band mate from my old band in London, had come over the day before and we had practised a couple of songs to play. The weather on the day of the gathering wasn’t amazing but we made the executive decision to move the sound system outside. It was a good choice because what had at first been just two guitars ended up being two electric guitars, bass, violin, and full drum set. My parents house is located at the top of a long gully with only a few houses in earshot so it is perfectly set up to make some noise…..and make some noise we did. 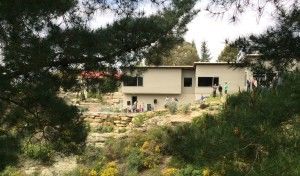 Here is a photo of us setting up. My nephew Ben took this from the other side of the gully

There was a huge variety of impromptu acts throughout the day. Children’s songs with dancing actions, adult band with kids singing made up lyrics, reggae tunes to rocky funkiness! The amount of talent on display was exceptional. Five year olds to 65 year olds were all in the action. After it got too dark outside we moved inside for a session on the acoustic guitars singing songs from the 60’s and 70’s. The last song was sung at around 12am as we all huddled around the old piano that has always been part of the furniture. Our family friend Steve and his daughters Celia and Jess, were the stars of the show being involved in every musical performance of the day. There is nothing more enjoyable than seeing talented musicians in their element.

I personally had a magical day. I caught up with some good friends whom I hadn’t seen in a while and who had travelled a good few hours to come and visit, I got to share the day with my family, I spoke a few words explaining to everybody about the project and where we plan to go, I played some music with some great musicians, I witnessed some amazing music from great musicians of all ages, and we had a donations bucket so we even raised some money for SOG. It was just one of those totally off the cuff days that basically had no planning involved and ended up being a day that I won’t forget!

Being home and hanging with friends and family has been amazing. The support that SOG has been receiving from all angles has been very humbling. My cousin’s children and their school in Auckland had a mission day (school fundraising day) and raised some money for us. I am good friends with the priest, Father Pat, of the church that my mother goes to and he asked me to speak to the Sunday mass. He organised a donation box for us. (I am not religious, but there are a large number of values that come from the church that I agree with, and Father Pat is a top bloke!) I was also invited to have a small stand at a local food event where my sister Carolyn and I spent the evening describing the project, handing out pamphlets (that my friends Bodean and Jacky paid for to print) and we also had a donations bucket. Everybody has been so generous.

It is a year to the day that I landed in Buenos Aires to start Food for Thought. Our support network is growing by the day and this journey is forcing me to be in constant contact with a huge number of amazing people! In a world where it is very easy to become pessimistic due to all of the horrible things going on, I am encountering the opposite. I am meeting and collaborating with the beautiful people of the earth who by being who they are, only encourage optimism. Working with these people gives us confidence and indicates that we are on the right track.